The First World War changed the political European map. With the defeat of the Central Powers and the end of the Ottoman Empire, Europe was divided and tensions were on the rise.

World War II was the second global war that occurred between 1939 and 1945, becoming the deadliest conflict in human history. The war was caused by a number of contributing conflicts, particularly building up through the 1930s towards the end of the decade.

This post takes a look at the pre-war events that lead to the outbreak of World War 2. It also looks at a World War 2 timeline of events following the end of the 1930s, showing the major events of the war.

Reading a timeline of World War 2 is a fascinating way to get to grips with the individual events of the war and see how the conflict unfolded chronologically.

You can discover World War 2 headlines for yourself in an original newspaper from the time. Select any date World War 2 dates between 1939 and 1945 and discover how news of the war reached those anxiously on the home front.

Turn the page to:

1933 was a significant year as it saw Hitler rise to power after being appointed Chancellor of Germany.

He was given dictatorial powers by the Enabling Act, and his removal of Germany from the League of Nations made other countries such as Britain and France very concerned about his plans and intentions.

After gaining power, Hitler banned all other political parties in Germany, making the country a One Party State.


February 24-25: League of Nations condemns Japan and calls for an end to the Japanese occupation of Manchuria. The Japanese delegation subsequently walks out.


March 5: Nazis secure 44% of the vote in Germany’s election.


March 27: Japan announces its intention to leave the League of Nations.

More military preparations took place in 1934, with Hitler going against the terms of the Treaty of Versailles by expanding his army and navy.

It was also the year that Mussolini prepared to invade Abyssinia! These were important decisions signalling that the world might be heading towards another war.

October 1: Hitler expands his army and navy, while also ordering the creation of an air force.

December 19: Japan refuses to be limited by future naval treaties


December 30: Mussolini begins preparations for an Autumn invasion of Abyssinia.

1935 was quite an intense year, with Mussolini leading Italy to invade Abyssinia in October after rejecting Britain’s offer for a compromise.

The USSR and France signing the Mutual Assistance Pact was also another preparation in case war became imminent.

March 7: The Saarland is restored to Germany.


May 2: The Soviet Union and France sign the Mutual Assistance Pact. The pact aimed to reduce the threat of Nazi Germany to Europe.

June 26: The British suggest a compromise to Mussolini over Abyssinia. The Italian rejects it.

September 18: The Soviet Union joins the League of Nations. 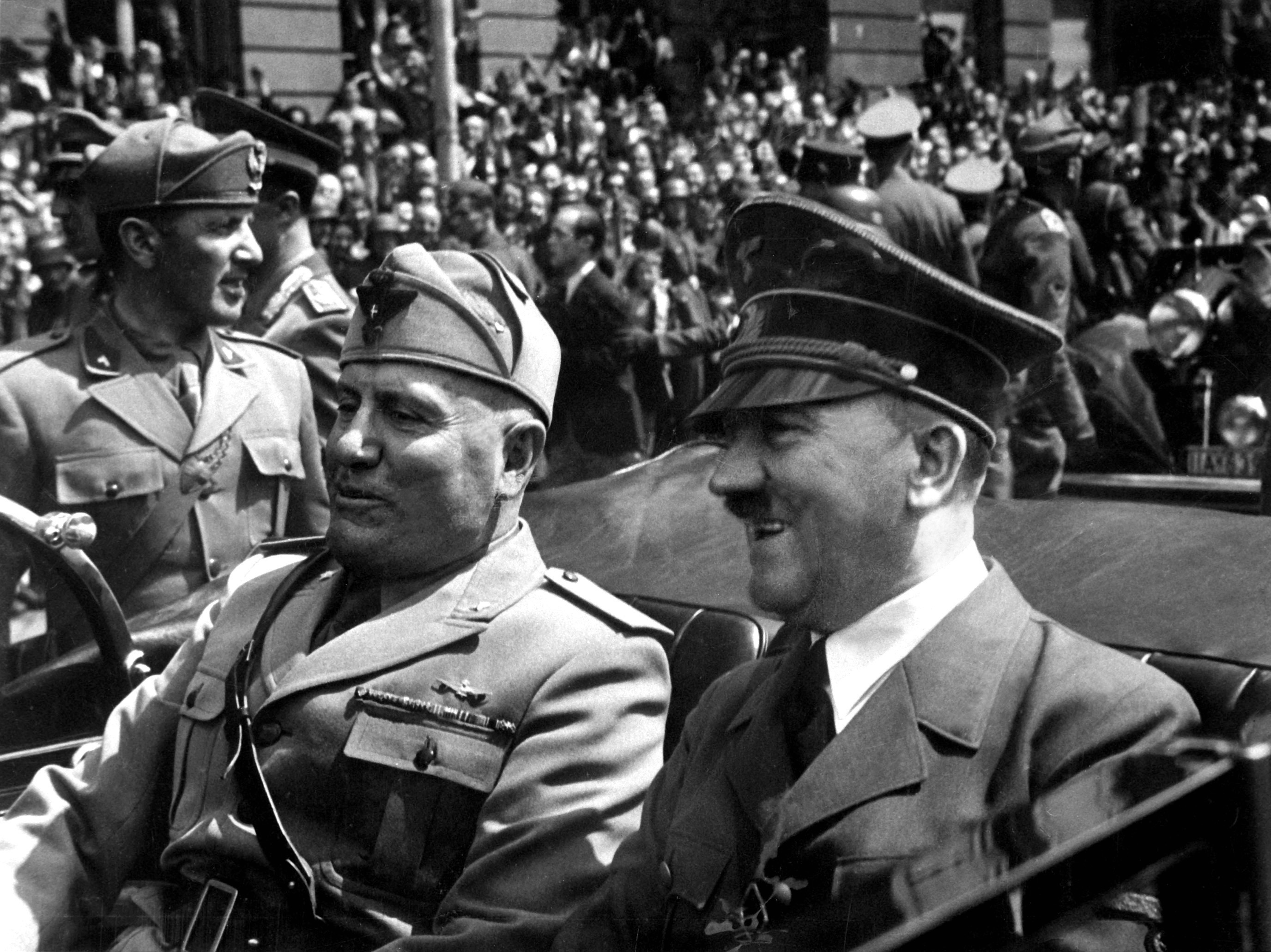 Despite the Treaty of Versailles of 1917 preventing German occupation of the Rhineland, an area of Western Germany, Hitler decided to march troops into the land anyway.

Hitler defying the terms of the Treaty and showing unwillingness to be dictated by decisions made at the end of the First World War ultimately created tension among European countries.

January 15: Japan withdraws from the Second London Naval Conference after their request for naval parity with Britain and the USA is refused.

July 18: The Spanish Civil War begins, between the Republicans and Franco’s nationalists.

The Axis alliance, consisting of Germany, Italy and Japan began forming in 1936. In 1937, Italy joined the German-Japanese Anti-Comintern Pact, acting as a concrete expression of the countries’ alliance.

With relations strengthening, tensions between the big powers in Europe were increasing as Europe got closer to another world war.

February 8: In the south of Spain, Franco’s forces take Malaga.

April 26: The Axis powers bomb the Basque town of Guernica in Spain.

Neville Chamberlain’s policy of appeasement was in full swing in this year, where Britain gave into Hitler’s demands in order to prevent war happening.

It was believed that by doing so, Hitler would be satisfied with what he had achieved and any potential conflict would be eradicated.

September 29: Britain, France and Italy sign the Munich Pact which agreed to transfer Sudetenland to Germany.


September 30: Prime Minister Neville Chamberlain returns from his visit to Germany, claiming he has secured “Peace For Our Time.” He makes a speech about the recent Munich Agreement and assures the nation that war will be avoided.

After significant tension in the 1930s, 1939 saw the start of the Second World War after Hitler’s invasion of Poland in early September. With negotiation not an option, Britain was forced to declare war on Germany.

This World War 2 timeline will show the events of the war in chronological order, starting with the events in September 1939 that plunged the world into another bloody battle.

1939 saw the extreme tensions of the 1930s come to surface when Europe entered a state of war. Britain finally declared war on Germany after Prime Minister Neville Chamberlain had followed his policy of appeasement to try and prevent conflict.

Even after the Munich Agreement, the countries no longer had a choice but to declare war on Hitler after his invasion of Poland.

September 1: Hitler invades Poland by attacking the free city of Danzig, sparking the start of the Second World War

September 2: British Prime Minister Neville Chamberlain issues Hitler an ultimatum, telling him to withdraw his troops from Poland or Britain will declare war on Germany.

September 4: The Netherlands and Belgium declare neutrality in the war.


September 14: A British fleet attacks a German U-39 boat.

November 30: The Russian Red Army invades Finland without an official declaration of war, known as ‘The Winter War’.

December 14: Russia is expelled from the League of Nations following its invasion of Finland.

The year 1940 had a significant impact on Britain – food rationing of everyday food items began, changing the nature of people’s day-to-day lives. The evacuation of Dunkirk also took place, as well as the beginning of the Battle of Britain and the Blitz.

While Hitler would eventually be defeated in the Battle of Britain, this came at significant cost to British life and infrastructure.

January 8: Rationing of certain foods, including butter, bacon and sugar, starts in Britain and people are issued with ration books. Read our intriguing blog on paper rationing during World War 2 here.

February 17: Britain begins planning the evacuation of 400,000 children from cities to rural areas.

May 26: A full-scale evacuation of the British and French troops trapped at Dunkirk begins.

May 28: Belgium surrenders to Germany.

June 4: The evacuation from Dunkirk ends and more than 330,000 troops were evacuated.

June 5: A major offensive is launched against France by Germany at the Somme.

June 10: Mussolini intends to expand Italian colonies in North Africa into British and French territories after declaring war on the two countries.

June 14: After French troops abandoned Paris the day before, German troops enter Paris in the morning of this day.

June 22: France surrendered to Germany after signing the armistice agreement. The fall of France completely changed the balance of power in Europe.

After France’s surrender, Britain was the last remaining power fighting against German aggression.

Hitler managed to control Northern ports in France to prepare for a British invasion, making the fall of France a very significant event in the war.


August 5: The Battle of Britain begins.

September 7: The Blitz begins in London and 300 bombers were escorted by 600 fighter aircraft.

October 31: The Battle of Britain ends with Hitler’s defeat.

1941 saw the end of the Blitz in Britain and Hitler turned his attention towards Russia, creating the largest casualty rate of the war. Germany also declared war on America, despite the country being neutral at the beginning of World War II.

However, the Japanese attack on Pearl Harbour had destroyed the American fleet, causing the US to declare war on Japan. Subsequently, Germany declared war on America, and the US was plunged into the world war it was determined to avoid.


May 11: The Blitz ends in London and the heavy air raids stop. During the Blitz, more than 1 million houses were damaged or destroyed, and 40,000 civilians were killed. Hitler then began focusing on Operation Barbarossa, the invasion of Russia.

June 22: Germany invades Russia, beginning the largest military operation in history. It would also cause the largest casualty rate.

December 7: Japan attacks the American Pacific Fleet at Pearl Harbour, beginning a two hour raid that would destroy warships and kill over 2,000 servicemen.

1942 saw some German setbacks, with the Red Army fighting heavily at Stalingrad and stopping German troops advancing further. Germany were also defeated at El Alamein, which forced them to begin retreating from North Africa.

These triumphs for the Allied powers were essential at this time.

February 15: Singapore surrenders to Japan and around 80,000 Commonwealth troops are taken as prisoners of war.

August 23: German troops stop advancing on Stalingrad after being met with heavy resistance from the Red Army.

The Warsaw Uprising was a significant World War Two event of 1943, with underground resistance attempting to liberate Warsaw from German occupation.

Hamburg was an important industrial centre for Germany, and it was bombed this year destroying infrastructure and injuring civilians.

January 14: The Casablanca Conference begins, in which Churchill and Roosevelt agreed to enhance American bombing of Germany and for Britain to focus military effort on the Far East after Italy had been defeated.

July 28: The German city of Hamburg is bombed, resulting in a firestorm killing more than 40,000 people and destroying around 40% of Hamburg’s factories.

August 3: Italy signals the possibility of a peace settlement with the Allies.

August 6: Germany sends troops to Italy to prevent the peace settlement from happening and to try and keep Italy involved in the war.

November 28: The Tehran Conference begins, with Churchill, Roosevelt and Stalin meeting to discuss the future of the war in Europe.

Hamburg in the Second World War

The Normandy landings, often known as D-Day, occurred in 1944 – one of the most important events of the Second World War.

D-Day was the largest seaborne invasion in history and marked the start of the cause to free North-West Europe from the Nazis. Ultimately an Allied victory with significant human cost, the Allies paved the way towards driving the Nazis from this part of Europe.

A couple of months later, the capital of France is liberated by the Allies, who eventually made German occupying forces surrender.

August 25: Paris is liberated by the Allies.

December 16: The Battle of the Bulge begins.

This year finally saw the Second World War come to an end. The unconditional surrender of the Axis powers brought victory to the Allies, with Victory in Europe (VE) Day taking place in May.

Fighting with the United States and Japan ended later on in the year after the Hiroshima disaster and Japan surrendering.

January 25: Auschwitz concentration camp is liberated by the Soviet army.

March 29: The last bomb of the war falls on Britain.

April 12: President Franklin D. Roosevelt dies from a stroke after tireless commitment to the war effort and when the end of the war in Europe was just in sight.

April 30: Hitler takes his own life when Soviet troops are roughly 500m from his bunker.

May 2: Berlin surrenders to the Russian army.

August 6: The first atomic bomb is dropped on Hiroshima by a US bomber, killing roughly 200,000 people.

September 2: Japan surrenders. The hostilities of World War 2 were firmly brought to an end with Japan’s surrender, marking the distinct end of all fighting and conflict.